The Campaign for Historic Trades is powered by Preservation Maryland, a nonprofit dedicated to protecting Maryland’s unique and irreplaceable heritage. Today, the organization explored the contributions Irish immigrants made to Baltimore, particularly to infrastructure building in the 1840s, with special attention to railroads.

Irish immigrants largely arrived to the port in Baltimore in the mid-1800s seeking refuge during the Potato Famine. By 1880 the Irish made up close to 25% of the foreign-born population of Baltimore. Many immigrants became railroad workers on the B&O Railroad, like James Feeley, whose family story is told at the Irish Railroad Workers Museum – the site of his former home – in West Baltimore, just a block away from the B&O Railroad Museum.

For the past almost 200 years, the experiences of workers on the B&O Railroad have helped various groups achieve civil rights and forge new roles in the American labor force. -B&O Railroad Museum 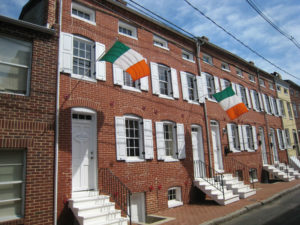 The Irish Railroad Workers Museum takes you through the home of Feeley and his wife Sarah, as they built their life in Maryland working on the Baltimore and Ohio railroad. James eventually rose to the role of boilermaker, one of the highest roles of engine mechanics in the B&O railroad at the time. Per the museum, Sarah also worked, washing laundry in the home on Lemmon Street, for a fee, for fellow B&O Railroad employees. 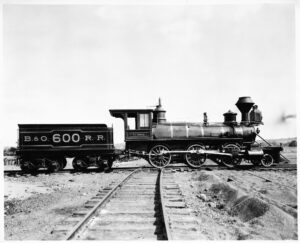 IRISH POPULATIONS IN THE US CONTRIBUTED GREATLY TO INFRASTRUCTURE BUILDING IN THE 1840S, PARTICULARLY RAILROADS

Just a block away from the museum/the Feeley home, is the B&O Railroad museum. There, you can find locomotive No. 600, on which Feeley worked, now part of the B&O Railroad Museum’s permanent collection.